One of the most enigmatic and awe inspiring areas of Far Haven is the Western Reach. The Western Reach and its string of islands stretch deeper into the Half World Effect than any other location in the world. The last island of the Western Reach, known as the Island of the Abyss, is the only landmass in the world that rests entirely within the Half World Effect. It is a small, rocky island capped by a single mountain black mountain. Constantly battered by winds over 180 miles per hour and assaulted by torrential downpours, this one island has never been explored and has only been seen from a distance. Even reaching the shores of the island is impossible due to the tsunami-like waves ceaselessly battering the craggy coast and waters between it and its nearest neighbor, Hekam.

The Western Reach is comprised of 12 islands, the farthest east of which is fewer than 50 miles from Red Mountain of the Inner Ring. The Islands, from east to west, are as follows:

Of all the areas of Far Haven, the Western Reach is the most remote and least populous. The Island of the Abyss, half of Hekam, most of Vos, and the tip of Varduul are uninhabited (primarily due to the severe weather and lack of natural resources). Only Ayra and Norsha are members of the Trinity Trade Council. The other islands, save for Vrasgal, have no central government and are made up of small, independent city-states.

Though they are far removed from the global community as a whole, all of the inhabited islands have access to motorcarts and other modern technologies. The islands must not be viewed as primitive backwaters where ignorant fools live, blatantly disregarding today’s technology and shooing foreigners. Instead, the islands are sparsely inhabited due to a lack of natural resources. Without major metropolitan centers and ties to the rest of Disparia the people are simply reserved and keep to themselves. That being said, the nation of Ayra is currently building their first railline that, when completed, will circumnavigate the coastal regions of the island. 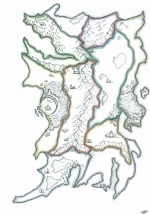